Memorial Candle Tribute From
Humble
"We are honored to provide this Book of Memories to the family."
View full message >>>
In Memory of
Alger P.
Russell
1931 - 2023
Menu
Send Flowers
Plant a Tree In Memory of Your Loved One
Click Here 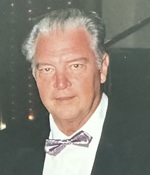 Alger P. Russell
April 26, 1931 – January 23, 2023
Alger Peacon Russell, Jr. passed away on January 23, 2023, at the age of 91. He was born on April 26, 1931, to Enedina “Edna” and Alger P. Russell, Sr. in Key West, Florida. At the age of 8, the Russell family moved to Tampa, Florida where he grew up and attended H. B. Plant High School. At the age of 18, he enlisted in the United States Navy. He was honorably discharged after a year of active duty and remained in the active reserves for an additional 15 years. He also served in the Merchant Marines. He was employed by ARMCO Steel until his retirement in 1984.

In 1949, his family moved to Houston, Texas where he met and married the love of his life, Ellen Jacqueline Barnett. They raised their two children in the greater Houston area. Over the years, he was an active member of many social clubs including a domino group with many close friends, Goodtimers, TNT, and Young at Heart. He was also very involved at church and served faithfully at Faith Tabernacle United Pentecostal Church, Irvington Pentecostal Church, and most recently, Pentecostals of Atascocita. His loss will be felt deeply.

Through the years, he was affectionately known as Brother Russell to his church family, Uncle Al to his many nieces and nephews, Dad to his two children, and arguably his favorite name, Papa, to his grandkids and great grandkids. He was very outgoing and never met a stranger - always eager to talk about history or current events. He loved watching the news and anything history related and always had a story to tell for anyone with a listening ear. He loved to cook and he loved to eat, particularly authentic Cuban dishes. Al and Jackie loved to travel and were blessed to fill their years together with trips around the world.