Memorial Candle Tribute From
Humble
"We are honored to provide this Book of Memories to the family."
View full message >>>
In Memory of
Jerry Spencer
Nichols
1955 - 2023
Menu
Send Flowers
Plant a Tree In Memory of Your Loved One
Click Here 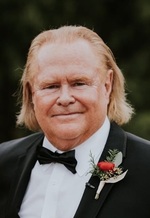 Jerry Spencer Nichols went home to his mother and father on January 8, 2023 ending his battle with cancer.

Jerry was born in 1955 in Houston, Texas to parents, Freddie and Lorraine Nichols. He graduated from James Madison High School in 1973 and began his 40+ year career in the nut, bolt, and fastener industry at Bayou City Bolt. In 2005 Jerry formed USA Fastener which turned into his legacy, pride, and joy. He was one of the greatest salesmen and leaders in the industry, and with the help of his employees, he grew USA greater than he could ever have imagined. After selling his company in 2016 and “retiring” a couple of years later, he bought a nursery and started a tree farm to fill his time and enjoy the outdoors.

Jerry had the biggest heart, always helping those around him in need and being a provider to his family. He was such a big contributor within the Houston area including the 100 Club, Houston Rodeo, Pearland Little League, and Grand Oaks High School Baseball Team. Jerry was a Houston sports fanatic and season ticket holder for the Astros, Rockets, and Texans. He loved giving the gift of these game experiences to friends and family. Whether it was enjoying a NASCAR race or losing some balls on the golf course, you can guarantee he had a beer in his hand and enjoying the day. His biggest blessings and enjoyment, however, came once he had grandchildren. Becoming a Papaw completed him more than anything else.

In lieu of flowers the family requests donations be made in his honor to Pearland Little League.
Printable
Share on Facebook