Memorial Candle Tribute From
Humble
"We are honored to provide this Book of Memories to the family."
View full message >>>
In Memory of
Charles Warren
Colegrove
1936 - 2022
Menu
Send Flowers
Plant a Tree In Memory of Your Loved One
Click Here 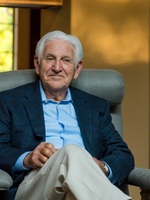 Reverend Charles Warren Colegrove, 86, of Cypress, Texas, peacefully passed from this earth on Friday, December 30, 2022. Charles was the oldest son born to Arthur Lloyd and Violet Jennie Colegrove in Grand Rapids, Michigan on May 10, 1936. He married his sweetheart and love of his life, Laura Edwards, on April 15, 1955. Last April they celebrated their 67th Anniversary.

Charles began his ministry at Apostolic Gospel Tabernacle, in Grand Rapids, Michigan, as Youth Pastor and Assistant to his father Pastor A. L. Colegrove. He played trombone in the church orchestra, served as president of the Michigan District Youth Division of the UPCI, and was the Foreign Missions Director. In 1966, he was elected as Pastor of Jesus Name Pentecostal Church in Bay City, Michigan until 1974. Following his father's death, he accepted the Pastorate of the Grand Rapids Church, which became Celebration Worship Center. He enjoyed leading this congregation until his retirement in 2004, then he transitioned into the office of Bishop. Charles served at Grace Church in Humble, Texas, leading the Prayer and OASIS ministry and fostering rich and eternal friendships. He spent his later years caring for and loving his family in the best example of grace and compassion. Charles leaves a special legacy of righteousness. He raised a family who loves each other, lives in peace with one another, operates businesses, loves Jesus and serves His local church in leadership and music ministry, and is committed to making the world better than they found it. Papa will be missed dearly and celebrated always.