Memorial Candle Tribute From
Humble
"We are honored to provide this Book of Memories to the family."
View full message >>>
In Memory of
Lowell James
Axtell
1939 - 2022
Menu
Send Flowers
Plant a Tree In Memory of Your Loved One
Click Here 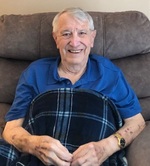 Lowell James Axtell passed away on Friday, September 16, 2022, at the age of 83, after a courageous battle with multiple illnesses. He is survived by his daughter, Holly Berkman and her husband Brian, son Bryan Axtell and his wife Amy, grandson Johnathan LeJeune and wife Terrace, granddaughter Kalia Johnston and husband Lee, grandsons Zachary and Brady Axtell, granddaughter Kelsey Dufner and her husband John, grandson Cody Berkman and great-grandchildren JR and Olivia LeJeune, McKinley Dufner, and Levi Johnston, brother Charles Axtell and wife Bev, sister Myrna Gergen and her husband Bernard, and sister Aleta Amon. He was preceded in death by his wife of 53 years Shirley Axtell and parents Gilbert and Clara Axtell.

Lowell was born on August 13, 1939, in Chadron, Nebraska. He grew up in Wewela, South Dakota on the family farm until he joined the Navy in 1958. While in the Navy he was stationed in Washington DC where he met Shirley in the summer of 1964 in Upper Marlboro, Maryland, and they were married in October of 1964. Due to his position in the Navy, they moved to Atsugi, Japan in 1968. While stationed in Japan, they welcomed their first child, Holly. In 1970 they relocated to Milton, Florida where they began a life in the community. Here they welcomed their second child, Bryan, and continued living their life of faith at Olivet Baptist Church. It was in this community of faith that he and Shirley built many friendships.

In 1981 the Axtell family relocated to their home in Pa Porte, Texas where Lowell worked as a process technician at PPG industries until he retired. Lowell loved his family and could be heard bragging on his grand and great-grandchildren any time he could. He was always involved in their lives and loved to show them how much he loved. Them. He was always happiest when surrounded by his family. Lowell enjoyed westerns and was an avid reader of Zane Grey novels. His love of life and faith caused him to embrace his current church First Baptist of Pasadena, where he was an usher and a hospital visitor until the Covid epidemic made going to visit church members in the hospitals unsafe. When asked about his hobbies, he would say that going to church as his greatest hobby. He enjoyed attending Tuesday luncheons and Wednesday evening church with his friend Charlie. He loved talking with Ronnie and was always happy to see or speak with her. Lowell was always telling anyone he could how much he love the Lord and how appreciative he was of all he had done for him.

The family would like to thank all of those who have held us in their thoughts and prayers. They would like to thank those who sent cards. Lowell commented he had not realized he was loved so much. We would like to say a special thanks to Brady Axtell, Zachary Axtell, Mike Blair, Michael Browning, Chad Easterling, Charley Hersberger, Lee Johnston, Johnathan LeJeune, John Logan, and Don Pettit for honoring Lowell as Honorary Pallbearers.

Our dear father, grandfather, and friend, you will be missed by all.