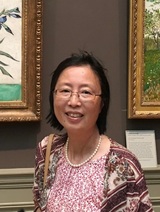 Memorial Candle Tribute From
Humble
"We are honored to provide this Book of Memories to the family."
View full message >>>
In Memory of
Theresa
Huang
1962 - 2022
Menu
Send Flowers
Plant a Tree In Memory of Your Loved One
Click Here 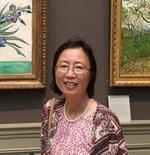 Theresa Chang Qing Pan Huang, a retired engineer and resident of Houston, TX passed away
on July 26, 2022 at the age of 60.
Theresa is survived by her husband, John Luke Ming Yu Huang; their sons and daughters-in-
law, Paul Kailai Huang & Esther Sheau Harn Yew, and Michael Milai Huang & Gabrielle
Elizabeth Huang; and her brother, Chang Jiang Pan.
Theresa was born in Shanghai, China on July 4, 1962 to Yu Hua and Li Juan Wang Pan. She
graduated from Shanghai University of Technology with a Bachelor of Science Degree in
Material Science in 1984 and worked as an engineer for a top bicycle company in Shanghai,
Shanghai Phoenix Bicycles. On April 14, 1990, she married Ming Yu Huang, a student and then
coworker of her mother at Tongji University. In 1992, she moved to the United States to follow
her husband as he pursued his PhD studies. On June 14, 1991 and January 12, 1997
respectively, she welcomed her two sons Paul Kailai Huang and Michael Milai Huang, who were
the most important part of her life.
Theresa was a devoted wife and mother, and a woman of many hobbies. She enjoyed
exercising, walking and participating in yoga at Dussen Park with friends. She was also very
passionate about line dancing and playing tennis with her sons. She loved to travel with her
husband, best remembered by a pilgrimage made to the Holy Land. Above all, she greatly
valued quality time with her family at home, sitting in the garden or playing mahjong. She was a
spiritual Catholic woman, involved in church activities such as a group that knitted quilts for
donation to people in need. She was very creative and loved to use her creativity to serve her
community. She will be deeply missed by her friends, family, and all who knew her.
A visitation will be held at 5:00 PM on August 1st at Rosewood Funeral Home located at 17404
W Lake Houston Pkwy, Atascocita, TX 77346, followed by a Rosary prayer at 6:00 PM. A
funeral service will be held at 10:30 AM on August 2nd, in the Holy Family Chapel at St.
Martha’s Catholic Church located at 4301 Woodridge Pkwy, Porter, TX 77365 followed by the
Interment Ceremony which will be held at Rosewood Memorial Park located at 2602 S Houston
Ave, Humble, TX 77396. The family requests donations be made to Baylor College of Medicine
Dan L Duncan Comprehensive Cancer Center in lieu of flowers. Donations may be made to the
link below.
Support Cancer Research and Care at Baylor College of Medicine today - Baylor College of
Medicine
https://secure.givebmf.org/site/Donation2;jsessionid=000000 . . .
Printable
Share on Facebook