Memorial Candle Tribute From
Humble
"We are honored to provide this Book of Memories to the family."
View full message >>>
In Memory of
Michael KC
Mejia
1984 - 2022
Menu
Send Flowers
Plant a Tree In Memory of Your Loved One
Click Here 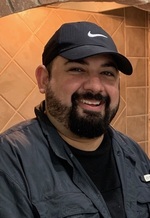 Michael K.C. Mejia, 38, passed away in a tragic car accident on July 23, 2022 which also took the lives of two beloved children, Aaron Michael, 9, and Lisa Marie, 8. Michael was born on March 12, 1984, in Pasadena, Texas to parents Angela Mejia Pachicano and Calixto Mejia who met at Pappas Restaurants.

Growing up, Michael was curious and loved to learn. He was a loyal friend and protective of his two younger brothers. Mike’s work ethic and determination set him apart at a young age and throughout his career at Pappas. Mike recently found the love of his life, Tara Welborn, and they were married last year on August 27, 2021. Mike was a wonderful provider and loving father to his three incredible children Charlotte, Aaron, and Lisa Mejia.

Michael, fortunate to be the first grandchild, stole the hearts of his grandparents who quickly crowned him king of the family. Proving them right, he won a beauty pageant at 2 years old, taking home a purple cape and crown. Michael’s childhood was spent with his grandfather outdoors, where he learned to work with his hands and play ball. He was so proud to be a big brother to “his” twins Calixto and Ernesto, even trying to take them to show and tell. Michael’s mother knew his heart at an early age; unlike most teenage boys, he was never afraid to confide in her which is something she cherished the most.

Mike first joined Pappas Restaurants in 2000 as a Busser at Pappas Seafood House. Mike, a natural leader, continued to advance, soon joining the management team at Yia Yia Mary’s in 2005 and thereafter, quickly going on to become a General Manager of Pappas BBQ where he led his own team. Mike went on to open several new locations, most recently Pappas BBQ #13.

Of Mike’s many successes during his Pappas career, he cherished meeting his remarkable wife, Tara, above all. In their short time together, they made every moment a memory, from family vacations to watching Jurassic Park and spending time playing poker with cousins in San Antonio. They were looking forward to growing their already beautiful family together and were laying the foundation for their bright future, including recently building and moving into their dream home.

Flowers may be sent to Rosewood Funeral Home located at 2602 South Houston Avenue, Humble, TX 77396. In lieu of flowers, donations may be made in memory of Mike Mejia to HFBC Counseling Center, 7401 Katy Freeway, Suite 600, Houston, TX, 77024.
Printable
Share on Facebook