Memorial Candle Tribute From
Humble
"We are honored to provide this Book of Memories to the family."
View full message >>>
In Memory of
Brandon Ray
Noah
1982 - 2022
Menu
Send Flowers
Plant a Tree In Memory of Your Loved One
Click Here 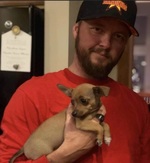 Brandon Ray Noah, of Humble, Texas, went to be with our Lord on June 21, 2022.
Brandon was born in Humble, Texas, on June 3, 1982. He graduated from Humble High School in 2001 before joining the Marine Corps. While in the Corps, he received several accolades, many of which included his Rifle Expert Badge, Pistol Marksman Badge and Certificate of Commendation. He left the Corps as a Sergeant in 2006 before becoming an ROV Supervisor for many years and then explored new opportunities to provide for the family he so loved.
Brandon loved fishing, drag racing, working on his cars and spending time with his friends and most importantly, his children.
He is preceded in death by grandparents Marjorie and William Cartwright and Louise and George Noah, uncles Patrick and Michael Cartwright and aunt Patricia Sloan. He is survived by his three children, Cody Dylan Palmer, MacKenzie Rose Lea Noah and Rustin Wade Noah (mother, Haley Rude); parents, Denise and Bobbie Noah; sister, Heather Noah and many aunts, uncles and cousins of the Noah and Cartwright family.
Visitation will be held at Rosewood Funeral Home on Friday, July 1, from 5-8 p.m. A grave side service will be held on Saturday, July 2, at 10 am.