Memorial Candle Tribute From
Humble
"We are honored to provide this Book of Memories to the family."
View full message >>>
In Memory of
James Daniel
Henery
1940 - 2022
Menu
Send Flowers
Plant a Tree In Memory of Your Loved One
Click Here 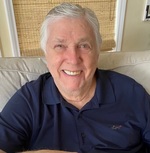 A sad event happened the other day. Depending on your preferred nomenclature, Jimmy Dan Henery passed away/passed on/died/expired/passed May 27, 2022. He was born James Daniel Henery, though most of his family called him Jimmy Dan. We don’t know if he had a favorite term for death – we never thought to ask him. None of these are really the appropriate term; better stated, God called him home.

In high school his guidance counselor asked him what he wanted to do upon graduation, and his response was “move to Alaska and be a hermit”. He moved to Austin, worked at an uncle’s body shop, and eventually enrolled at the University of Texas. He was the first in his family to graduate from college; he wound up with a PhD. He loved Longhorn sports. Two of his kids wound up becoming Aggies

Jim worked in the chemical industry for nearly 30 years in research and development. He later spent a few years working for a company which made filters. He then joined his in-laws in their business, learned the ropes, and eventually purchased the business. He was the last one to let you down – it was a burial vault business.

Ever the stacker, Jim loved to read. Stacks of magazines and books reside near his recliner. Biographies and autobiographies were the norm, with the occasional history book thrown in for good measure. Financial magazines were often received and stacked, waiting to be read at a later date. He loved to travel. Work took him to many places. A trip to West Point one fall was memorable due to the beauty of the leaves changing color and the lack of meetings in the afternoon – he said if he’d known how much free time he would have he would have brought Darlene. Another trip took him to Chicago, whereby he and a colleague couldn’t decide where to eat, and they eventually settled on dinner at a Chicago-based restaurant: McDonald’s. On a prior trip to Chicago someone asked him if he knew who shot J.R.

Later in life he and Darlene traveled around the country for different work meetings and conventions, often arriving a day or two early or departing late to experience a new place. Several cruises were taken. He zip-lined through the forest in Mexico…Darlene cheered him on. They went to Europe several times. Once they went to Switzerland just after a skin cancer was removed from the side of his face. By the time they landed in Zurich he looked like he’d been beaten up. By the end of the trip the swelling had gone down. He got sick in South America – sometimes that happens when you have to take a malaria vaccine. He had the trip of a lifetime when he and Darlene went to Africa – this obituary would be even longer if the trip was described – let’s just say it was awesome.

Jim accepted Jesus as his Lord and Savior in 1984; interestingly, the man who was preaching that night preached the day Darlene was saved back as a youngster. Not many people can say that. He loved the Lord and served his church in multiple capacities through the years. He only sang in the choir for a couple of years – singing may not have been his spiritual gift, but that’s ok – most of us can’t sing. But one of his grand-daughters (Reagan) sure can.

Jim really loved his family, and his family loved him. He’s survived by his loving wife of nearly 45 years, Darlene, and his four kids: Jay (Penny), Amy (Dan), Kevin, and Brett (Amanda). In addition there are his
granddaughters: Jenn, Nikki (Joah), Makenzie (Diego), Caitie (Matt), Reagan (to be married to Houston on what would have been Jim’s 82nd birthday), Reece, and Ashlen. Along with his great-grandchildren he’s survived by numerous nieces and nephews, as well as cousins, and a younger sister who adored him; we call her our crazy Aunt Karla (she’s a wonderful aunt). Jim is preceded in death by his parents as well as three brothers and two sisters. The patriarch of our family will be sorely missed.

Visitation will be at Rosewood Funeral Home (Atascocita location) Friday June 3rd from 5:00-8:00pm. A service will be held Saturday June 4th at 10:00am, followed by a burial at Rosewood Memorial Park in Humble. Jim’s (joking) wish was for everyone to be extremely sad and somber at his funeral. We’ll be celebrating the amazing life he lived. If he has impacted your life, or if you have a funny (or not funny) story to share, please join us.
Printable
Share on Facebook