Memorial Candle Tribute From
Humble
"We are honored to provide this Book of Memories to the family."
View full message >>>
In Memory of
Robert Sean
"Rob"
Bartel
1973 - 2022
Menu
Send Flowers
Plant a Tree In Memory of Your Loved One
Click Here 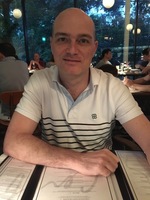 After a valiant two- and one-half year battle against cancer Rob passed away on Friday, April 22, 2022, at his home in Humble, Texas, surrounded by his family. He is survived by his parents, Don, and Rose Marie; his wife, Kate; a son, Tom; and daughters, Christina, and Tracy; other relatives, coworkers, and many friends.

Although a scholar he enjoyed spending time outdoors. His interest was varied and included hunting, fishing, camping, hiking, swimming, and boating. Sports were a big part of his high school experience playing soccer, football, wrestling, golf, and track events. He was a member of the high school band playing trumpet. When he got to college he concentrated on soccer and his academics.

Another interest was airplanes and flying. It started when he and his dad began building and flying radio-controlled airplanes. Mostly Dad built and Rob flew. This led to flying lessons and part ownership of a plane after he had a job and was making his own money. Many of his flights were to visit his grandmother, Myrtle Dunnegan. He got involved with Angel flights and continued ferrying cancer patients until he went to Singapore.

Whether Rob was traveling with parents, friends or wife and children, it was always exciting and educational. All his traveling companions enjoyed his meticulous planning.

When he embarked on his professional career, he decided on Exxon Mobile where he worked in the chemical field in Texas and Singapore. Rob enjoyed the challenge of the workplace and the many colleagues with which his life was enriched.

It was in Singapore that he met and married Kate. She had a son, Tom, who he taught to swim. golf, and play soccer. Rob enjoyed reading bedtime stories to the girls. With the addition of the two daughters, the family was complete. He was a good father and husband.


In lieu of flowers donations may be made to MD Anderson, Post Office Box 4464, Houston, Texas 77210-4464; American Cancer Society; or a charity of your choice.

Sincere thanks to Silverado Hospice for their care and concern for Rob in his final days. Also, the family is grateful for the support, visits, calls, meals, and prayers sent our way.

Interment will be in the IOOF cemetery in Sullivan, Missouri.