Memorial Candle Tribute From
Humble
"We are honored to provide this Book of Memories to the family."
View full message >>>
In Memory of
James Frederick
Hummel
1941 - 2022
Menu
Send Flowers
Plant a Tree In Memory of Your Loved One
Click Here 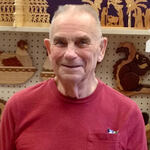 Jim graduated from Mishawaka High School in 1959 where he was a member of the National Honor Society and the Student Council. Jim continued his education at Trine University in Angola, Indiana graduating in 1962 with a degree in civil engineering. Jim’s engineering career began in Detroit, Michigan building highways and bridges. In 1963, Jim married Bonnie Rae Wilcox, together they raised two sons. In 1972, Jim moved his family to Kingwood, Texas, where he was one of the first fifty families to buy a home in Kingwood. He loved Texas and the warmer weather, never wanting to return to the cold snowy winters. Jim was a man who quietly lived out his faith. Jim and Bonnie helped establish the Kingwood United Methodist Church. First, in a shopping center, then through a building fund. In 2001, five years after Bonnie’s passing, Jim married Cindy Sharp moving to Conroe, Texas. The next 10 years, Jim worked for Fiesta Mart in Houston, retiring in 2011.

Jim had many interests from bowling and fishing, to running marathons, working Suduko puzzles, and discussing politics. Jim was a master woodworker creating bowls, intarsia, toys, bookcases, and furniture. Jim would sell his woodworking items at craft shows. In 2008, Jim created a working ferris wheel and won First Place at the Montgomery County Fair.

Jim was one in a million. A man of many talents. He was always willing to share his time and talents with others, helping with fence building, a home remodel or building a book case. Jim met each day with a smile and a positive attitude ready to accomplish any and every task. Jim leaves behind a legacy of love, laughter, kindness, and selfless generosity; he will remain in our hearts forever.

In lieu of flowers, donations in Jim’s name are greatly appreciated to Trine University to the engineering expansion project at trine.edu/give or American Red Cross at redcross.org.