Memorial Candle Tribute From
Humble
"We are honored to provide this Book of Memories to the family."
View full message >>>
In Memory of
Jack
Giacona Jr.
2021
Menu
Send Flowers
Plant a Tree In Memory of Your Loved One
Click Here 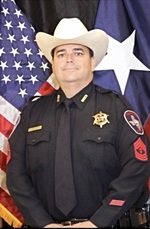 Jack was born in Houston, Texas on February 19, 1969, and was called home on July 19, 2021. Jack was an avid outdoorsman who enjoyed hunting, fishing, boating and diving with his wife and daughters. He looked forward to vacations where he could travel to Mexico and the Caribbean with his family, and always looked forward to his trips to Disney World. Jack also loved spending time with his mom, sisters, brother and his extended family. Family was very important to Jack, and he showed it in everything that he did every day. His life revolved around his family.

Jack began his law enforcement career in 1993. He dedicated his last 26 years to the Harris County Precinct 2 Constable’s Office. He attained the level of Master Peace Officer and rose to the rank of Lieutenant assigned to the schools’ division for Galena Park ISD. During his years at the Constable’s Office, those with whom he worked, and especially those luc
ky enough to be in his command, found him a tough but fair leader, capable of earning their deep respect. His family and friends knew he would stand by them in adversity and always be a trusted friend.

He was preceded in death by his father, Jack Giacona.

He is survived by his loving wife of 23 years, Wanna Giacona; daughters, Keri and Katie Giacona; mother, Pauline Giacona; sisters, Jewel Annette Giacona and Mary Stanley (husband, Tom Stanley); brother, Jimmy Giacona; along with a host of nieces and nephews. He is also survived by his lifelong friends, Scott Furches and Robbie Whitaker.