In Memory of
Jose
Esparza
1947 - 2021
Click above to light a memorial candle.
Memorial Candle Tribute From
Humble
"We are honored to provide this Book of Memories to the family."
View full message >>>
Send Flowers
Plant a Tree In Memory of Your Loved One
Click Here
Menu 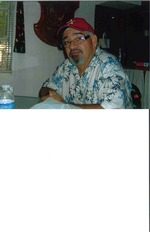 Joe was born on March 20, 1947, to Concepcion and Felipa Esparza in Corpus Christi, TX (Chapman Ranch). Joe was the 7th of 14 children.

Growing up in Corpus Christi, Joe began working at an early age to help support his large family. As a teenager, Joe was able to help his parents buy a new home.

In 1966, Joe was drafted into the United States Army. After his training in Fort Campbell, Kentucky, Joe was sent to Korea where he served until 1968.

Joe's entire working career as an adult was in the grocery business, working for both Kroger in Houston and HEB in Corpus Christi.

When Joe was not working, he loved, loved, loved to fish in the surf at North Padre Island. On his day off he would get up, drink his coffee and say”The Reds are running.....Gotta go!!!” He always looked forward to the annual Surf Cats Fishing Tournament. During this weekend event, he enjoyed so much spending valuable time camping out at the beach with family and friends trying to catch that prize fish.

Joe had to retire early due to illness, but he continued to live life to the fullest.
Joe adored his two little dogs Houston and Astro. He also loved to root for his home sports teams, The Houston Astros, Texans, and Rockets. When Joe was not watching sports on TV, he loved to watch old western series and movies.

Joe was a happy go lucky guy. He loved his large family and he had lots of friends. He was the type of guy who loved to give HUGS.