Memorial Candle Tribute From
Humble
"We are honored to provide this Book of Memories to the family."
View full message >>>
In Memory of
Gerald Leroy
Dennis
1933 - 2021
Menu
Send Flowers
Plant a Tree In Memory of Your Loved One
Click Here 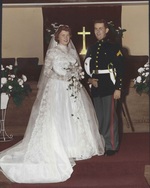 Gerald “Jerry” LeRoy Dennis, 87, died January 8, 2021 due to complications from COVID-19.
Jerry was born August 31, 1933 in Canton, Ohio, to Roy and Cora (Southwick) Dennis.
He enlisted in the United States Marine Corp on July 21, 1953 and was active duty during the Korean conflict. Corporal Dennis was honorably discharged on July 20, 1955 and proudly supported the USMC until his death.
On November 6, 1954, he married Barbara Ann Karns, his childhood sweetheart who preceded him in death. They were married for 60 years. They enjoyed their lives together in Ohio, Michigan, Nevada and Texas.
Jerry is survived by his children, their spouses and grandchildren, Scott and Debbie Dennis and son Jeffrey, DeAnne and CJ Meaux and son Casey and daughter Melissa and Jeff and Sheila Dennis and daughter Erin and son Eric. His special pal, Bo, a rescue dog, was his constant companion.
Services will be held Thursday, January 14 at 10:45am at Houston National Cemetery where Jerry will join his fellow veterans. In lieu of flowers, please consider a donation in his name to the Marine Toys for Tots program (www.toysfortots.org).