Memorial Candle Tribute From
Humble
"We are honored to provide this Book of Memories to the family."
View full message >>>
In Memory of
Jason Keith
Coronado
1974 - 2021
Menu
Send Flowers
Plant a Tree In Memory of Your Loved One
Click Here 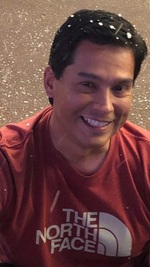 Jason Keith Coronado was born in Houston on October 27, 1974. The son of Annie and Desiderio Coronado, Jason graduated from J. Frank Dobie High School in Houston in 1993 and attended the University of Houston.

Jason was an extraordinary husband, father, son, brother, firefighter and friend. His survivors include wife Stephanie; sons Justin and Ryan; father Desiderio; brothers Steven (Amy) and Daniel (Jenny); in-laws Reno and Deloris Luxardo and Robert and Carolyn Johnston; and many loving aunts, uncles, nieces and nephews, and cousins. He was predeceased by his mother Annie and grandmother Genevieve Falcon.

Jason met the love of his life, Stephanie, in eighth grade. Married on June 17, 2000 in Houston, they were together for more than 30 years. Jason adored his wife and sons. His attitude was, “Anything for them.” He pushed himself to be a better person for them. He strived to be an extraordinary firefighter and officer as well – for the people he served in the community and for his crews on the fire ground and at the station. Jason took a genuine interest in the men and women he served with at the fire station. He truly enjoyed getting to know and work with them.

In the eyes of his family, Jason was a hero, a protector, a healer and man of faith, and a happy “fix-it” person. He was funny even when his silly jokes missed the mark. He had great taste in clothes and people, liked a bargain, a good game of golf, and most any desserts, and he could make fun of himself. A loyal and faithful friend, Jason seemed to know everybody in their community. He volunteered for his sons and their friends in baseball, basketball and at school as a coach and Junior Achievement mentor. Some of the Coronado family’s best times included travel throughout the United States and abroad for visits to beaches and baseball stadiums from coast to coast. Jason and Stephanie loved watching Justin and Ryan play baseball and they cherished their extended baseball family.

The Coronado family offers gratitude for the support of the HFD Family and the Houston Professional Fire Fighters Association.

Livestreaming the Memorial Service will be available by going to live.grace.one