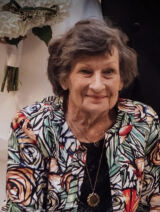 Memorial Candle Tribute From
Humble
"We are honored to provide this Book of Memories to the family."
View full message >>>
In Memory of
Elizabeth Joan
Webb
1931 - 2020
Menu
Send Flowers
Plant a Tree In Memory of Your Loved One
Click Here 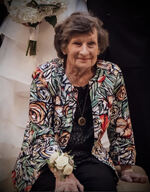 Elizabeth Joan Webb was a loving wife, mother, grandmother, sister, aunt, and friend. She left this world peacefully on December 27, 2020 at age 89.

Elizabeth was born to Slim and Joda Lewis on March 2, 1931 in Hobbs, NM. She met her husband, James A. Webb, while working in her father’s cafe in Lovington, NM. They were married in 1949 in Lovington and had 2 children, Sally Joan and Jeannan. They moved throughout New Mexico and Oklahoma before settling their family in Houston, Texas where they spent the majority of their lives.

Elizabeth spent most of her adult life helping to care for her eldest daughter, Sally, who was born with William’s Syndrome. Once Sally was grown, Elizabeth became greatly involved with the organizations that helped to support her and other mentally disabled adults. She was a very talented china painter and even won Grand Champion at the South Plains Fair in Lubbock, Tx several years in a row. When she wasn’t caring for her family or painting, Elizabeth loved traveling and spending time outside in the flower beds, growing all kinds of beautiful flowers to keep in her home.

Elizabeth is survived by her brother Gene Lewis; daughter Jeannan; grandchildren and their significant others Matthew Poteet and Jessica Miller, Virginia and Carlos Ortiz, and Bryan Barber; great grandson Carlos David; niece and nephews John Webb, LouAnn Webb, Mark Lewis, and Steve Lewis and their families. She is preceded in death by her daughter Sally; parents Slim and Joda Lewis; husband James A. Webb; and sister in law Pat Lewis.

A private graveside service is scheduled for 2 pm on January 16, 2021 at Rosewood Memorial Park in Humble, Tx.
Printable
Share on Facebook