Memorial Candle Tribute From
Humble
"We are honored to provide this Book of Memories to the family."
View full message >>>
In Memory of
Thomas Edward
Hurtt
1948 - 2020
Menu
Send Flowers
Plant a Tree In Memory of Your Loved One
Click Here 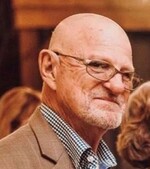 THOMAS EDWARD HURTT (TOMMY)
Tommy Hurtt’s unexpected passing came Wednesday, September 23, 2020 in Humble, Texas at age 72. Born in Houston, Texas on February 17, 1948, Thomas was the youngest son of Willie Talbot and Fannie Mae (Johnson) Hurtt.
Tommy attended Galena Park Schools and soon after joined the Navy in February 1965. He served on the U.S.S. MARKAB as a welder fitter, and was honorably discharged in February 1969. After the Service, he led a successful career in the oil industry where he was always willing to lend a hand and his wealth of knowledge.
He was a Mason, a member of the VFW, and a proud American. Tommy was a member of The Lord’s Glory Church along with his loving wife, Shirley, to whom he was married and devoted to for 50 years. In addition to his parents, he was preceded in death by brothers, Phillip, Mike, and Billy, and sister Patsy.
He is survived by wife Shirley, their son Dusty Hurtt and his wife Christina, as well as their daughter, Monette Hurtt, and her partner Kathi. He also leaves grandchildren: Amanda Salazar and husband Steven and their daughter, Lillie Anna….Austin Hurtt and his partner Kara, their sons, Jaxon and Carson… Jackie Lacefield…Corey MacAllister and his wife Ashley and their two girls, Ava and Ella… and Brett MacAllister. He is also survived by numerous nieces and nephews, all of whom miss him dearly.